Dengue has taken a state of almost an epidemic affecting hundreds of people around the country. Children of Shapla Foundation are working voluntarily to raise awareness to reduce the further damage of dengue. As a part of the campaign, there was a rally for social awareness against Dengue. 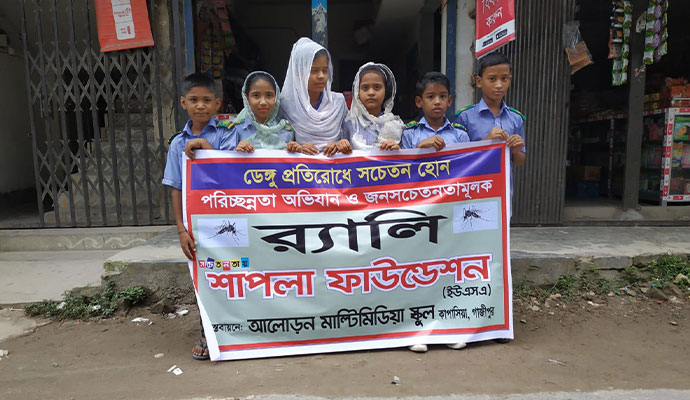 Being a parent is very emotionally rewarding. When my child accomplishes a milestone, the feeling is indescribable and incomparable. If there is any feeling close to such, I would say it’s the feeling I get every time I open a letter from my child that I sponsor through Shapla Foundation. Dare I say, there are few things that are more rewarding than seeing the smile on these kid’s faces. Shapla Foundation has created an amazing and smooth process that allows its sponsors to monitor the breathtaking achievements of the kids.

I believe no one can help everyone, but everyone can help someone. Thanks to Shapla Foundation I have found the someone I feel proud to help. These kids are really the future and I’m content knowing that I’m doing my part to build a brighter future. Through the program we can really see that these kids try their best given their difficult circumstances; they have a willingness to grow themselves and all they need is a pat on the back from us.